Women Advised To Take Risk In Their Businesses 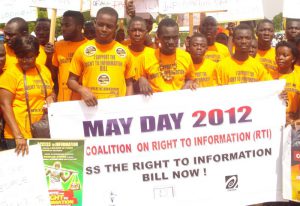 POS Foundation represents the youth on the Coalition of the Right to Information (RTI) which is spearheaded by Commonwealth Human Rights Initiative (CHRI), Africa office in Accra. The Coalition advocates and organizes activities in promoting and lobbying for the passage of an effective RTI Bill. POS Foundation led the team on an awareness campaign to all the Regions ahead of the Members of Parliament’s (MPs) Regional Consultation on the RTI Bill, while monitoring the consultation process. Representing the youth on the coalition, the Foundation has been mostly responsible for the mobilization and active participation of all protests and matches that have also helped increase pressure on policy makers to push the bill to its current state, now in Parliament.

POS Foundation on behalf of the coalition have engaged Student-journalists at the Ghana Institute of Journalism, the National Union of Ghana Students (NUGS) and other groups sensitizing them on the bill, its short falls as well as calling on them to push for the speedy passage of the bill. POS Foundation’s boss (RTI steering committee member) who worked at the RTI secretariat on part time basis continues to serve as a resource person on RTI programmes organized by different national NGO’s at different parts of the country of which include the RTI Campaign by the Center for Democratic Development-CDD, Women manifesto and others.

Using the participatory approach with examples drawn from specific group of engagements, the bill, seen as a legal document is practically explained while relating it to the day to day activities of the Ghanaian at different forums for easy understanding. The bill is currently in parliament. (read media publication-www.ghanaweb.com › Opinions › FeatureArticles › 2012-05-16‎,allafrica.com/stories/201203140579.html)